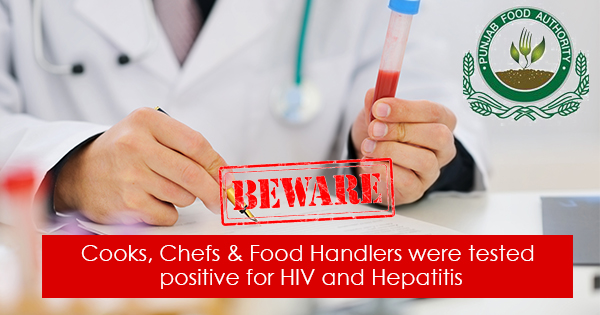 LAHORE: The results of health and disease evaluation tests of cooks, chefs and food handlers associated with food industry by Punjab Food Authority (PFA) in Lahore have made shocking and unreal revelations as 140 of them were tested positive for dangerous communicable diseases for example HIV (AIDS) and hepatitis.

The data collected revealed 140 failed to clear the medical tests. These included four cases of HIV, 50 cases of HCV, 20 cases of HBV, eight cases of TB, 38 cases of typhoid and 20 failures of CBC.

A majority of hotels, restaurants and food businesses in the country have not fulfilled the basic legal requirement of blood screening of their staff, which is spreading contagious and extremely dangerous diseases among the public.

Sources in PFA revealed that there are over 15,000 places in the provincial capital of Punjab – Lahore where food-related business, including dining, packing, manufacturing and sale of thousands of food items is going on. Sources said the roadside stalls and mobile food sellers were also included in the 15,000 spots.

Blood screening of food handlers and other workers, dealing with food items, was declared compulsory and after the first blood screening, the then Food department came to know that a large number of food carriers, including waiters and cooks, were suffering from different contagious diseases like hepatitis B and C, TB and typhoid.

He said PFA would take strict action against those playing with the lives of general public by spreading contagious diseases.

We appreciate this effort from PFA to help securing the health threats to the locals of Pakistan and specially Lahore.