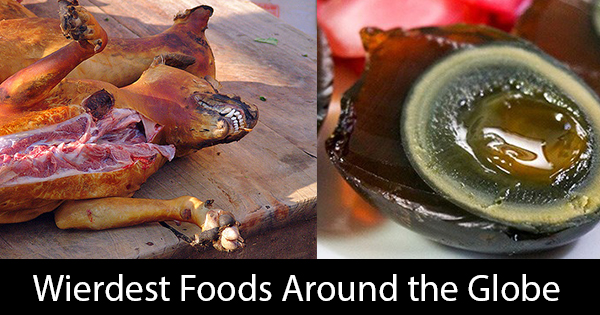 Reckon you’ve got a strong stomach? You might reconsider once you’ve seen these… From cheese maggots to rotten eggs, these are some of the world’s weird foods.

Escamoles are the larvae of a venomous ant species that lay their eggs deep down in the roots of agave or maguey plants in Mexico (so harvesting them is not a barrel of laughs). The larvae are said to have a consistency akin to cottage cheese and taste somewhat nutty; they’re normally eaten as the filling in a taco or omelette.

As euphemisms go, this one’s a corker: shirako in Japanese means “white children” but refers to the sperm sacs of either cod, angler fish or puffer fish. Looking like white blobs of goo or miniature brains, they are said to have a sweet custardy taste.

It’s waste not want not when it comes to tuna in Japan; even the eyes are plucked out and served up cheap in supermarkets. To cook, simply boil or steam, and season with garlic or soy sauce. Perhaps unsurprisingly, it tastes a little like squid.

This fertilised duck egg, with its partly developed embryo inside, is boiled alive and then eaten from the shell with salt, chilli and vinegar. You’re supposed to tap a hole in the top of the shell, sup the savoury liquid and then crunch down the rest of what’s inside – feathers, bones and all. Bleurgh.

Few people would look at a tarantula and think “lunch”, so it’s perhaps no surprise that these spiders were first eaten by Cambodians starving under the Khmer Rouge regime. Bizarrely, they became popular and are now served as a deep-fried snack throughout the country. Apparently they taste a bit like crab.

One of the world’s more unusual soups, Gaeng Kai Mot Daeng combines a mixture of ant eggs and partial embryos from the white ant, plus a few baby ants to add sourness. If your stomach can handle it, the flavour is supposedly quite tasty: sharp and delicate, and a little like shrimp.

Nose isn’t exactly a choice cut, but that hasn’t stopped some adventurous Canadians from experimenting with nasal gastronomy by boiling them up with onions and spices, removing the hair, boiling again, then slicing and covering with a broth that sets into a jelly. It certainly looks as bad as it sounds.

This supposedly health-giving Korean soup is made with spring onions, dandelions, a host of spices and one infamous ingredient: dog meat. Though you will struggle to find it on menus today, it’s still popular with the older generation and generally agreed to taste better than it smells.

Corn smut is a fungus that turns normal corn kernels into tumour-like growths covered in blue-black spores. To most people that’s a diseased corncob that needs to be thrown out; to the Mexicans, it’s a culinary speciality. They call it huitlacoche (“sleeping excrement”) and enjoy the woody, earthy flavour of the fungus.

Glass of fermented horse milk, anyone? In Mongolia, this isn’t an unusual offer at all. They make a kind of beer called airag by taking a mare’s milk and letting it ferment into a fizzy, sour and slightly alcoholic liquid. It’s traditionally served chilled in a bowl-shaped cup; dregs are supposed to be poured back into the main container.

A traditional Inuit meal of frozen whale skin and blubber, muktuk is normally served either raw or pickled. It looks a little bit like licorice allsorts and has several layers: the skin (which apparently tastes like hazelnuts), the fat (chewy) and the protective layer in between (even more chewy). Don’t eat if wearing dentures.

How anyone conceived of this dish is a mystery. To prepare: first gut and behead a Greenland shark, place in a shallow grave and cover with sand and stones. Leave for two to three months, then cut into strips and dry for several more months before serving: first-time tasters are advised to hold their nose and try not to gag.

If you discovered a rotten egg, would you eat it? Someone in ancient China did, lived to tell the tale and now it’s an established delicacy. The eggs (also known as hundred-year eggs or pidan) are covered in clay, ash and salt for months, by which time the yolk is dark green and stinks of sulphur. Mmmm!

Many advocate keeping the fat on meat, but the Ukrainians decided to go one step further and just eat the fat on its own. Usually it’s made into slabs, smoked and left in a cool cellar for a year before being eaten sliced thinly with rye bread. Ukrainians love it so much they even have a festival of lard to celebrate it.

A pie with fish that stare at the sky: Stargazey originates from the Cornish village of Mousehole in England, and is served on Tom Bawcock’s Eve (23rd December). According to legend, this heroic sixteenth-century sailor rowed out one December evening in high storms and returned with a catch big enough to feed the starving residents.

Israel has of late been suffering from a plague of locusts, but fortunately this is the only insect to be considered Kosher, so Israelis have been eradicating the pests in a unique way: by eating them. Deep-fried and chocolate-covered locusts are apparently going down a storm (no pun intended).